Brexit and Irish business – the fallout and the opportunities for Ireland

With the dust settling after the tumultuous decision of the United Kingdom (UK) to leave the European Union (EU), it is clear that the UK vote does not immediately alter the legal relationship between the UK and the EU.

The unplugging of the UK legal system from the EU in the coming years will create gaps which will need to be filled with replacement rules and regulations, many of which may have implications for Irish businesses. Irish businesses need to start considering the legal consequences for their operations.

Article 50 – when will it be triggered?

Article 50 of the Lisbon Treaty sets out the process for a member state to withdraw from the EU and provides that a member state must notify the European Council of its intention to leave, thereby triggering the process. There is no deadline for notification. Following notification there is a two-year period (or earlier if both sides agree) in which to negotiate the withdrawal agreement. The negotiation period can be extended by agreement between the UK and all EU member states. If no agreement is reached, the UK will automatically be out of the EU.

It is clear that the UK will proceed with caution and the UK Prime Minister, David Cameron, has indicated that it should be up to the new prime minister to commence the notification process in October of this year. It appears from media reports that the European leaders would prefer immediate action to be taken by the UK government, but despite this only the UK can trigger the Article 50 process.

What will the legal impact be for Irish businesses?

The UK has been a member of the EU for over four decades and in that time thousands of EU laws have been implemented.  As we know, EU laws cover every aspect of life and, in particular, from a commercial perspective, EU law drives the regulation of financial services; employment law; intellectual property and data protection; consumer protection; product safety and trade standards; competition law, and state aid and merger law; to name but a few. In order to disconnect the UK legal system from the EU, the UK will need to decide which EU laws to retain, alter and repeal – it has been estimated that there are over 80,000 pages of EU agreements. This will create legal gaps which will need to be filled with replacement regulations and laws which may have consequences for Irish businesses. Until the UK formally leaves the European Union, EU law continues to apply to and within the UK. Below are some of the ramifications that may arise for your business.

Once the UK has left the EU, there will be no free movement of personal data between the UK and the remaining EEA States. It is unclear what type of data protection regime the UK will decide to adopt and it could be an opportunity for the UK to adopt a lighter regulatory regime. In the event that no steps are taken to address the data protection issues or the UK cannot reach agreement with the EU, Irish businesses will need to find alternative mechanisms to legitimise the transfer of personal data to the UK.

With at least two years before the UK exit the EU, Irish businesses should start working on protecting and optimising their intellectual property rights now while there is still adequate time. Irish businesses should identify agreements where the EU is the defined territory and IP portfolios will need to be supplemented with UK national IP rights. Irish businesses with EU trade marks will need to start using them widely. Furthermore, mutual recognition of foreign judgments between the EU is governed by the Brussels Regulation which will no longer apply to the UK once they exit the EU.

While there is some concern that termination clauses and force majeure clauses may be triggered by Brexit, this is probably unlikely. However, contracts should now be examined to ensure that there are no provisions making the contract conditional on EU membership or where the territory is defined as the EU. Furthermore, when drafting future contracts for the sale of a business, it will be important to consider the inclusion of protections against the unknown - for example, fluctuations in tax and exchange rates.

Britain is Ireland’s largest energy trading partner and we are very dependent on the UK for our supply of natural gas.  At present Ireland’s only electricity inter-connectors are with Britain and Northern Ireland.  In addition we have had a fully integrated single electricity market (SEM) with Northern Ireland since 2007. The SEM is currently being fundamentally redesigned to bring it into line with the European target model.  This newly designed electricity market (I-SEM) is due to go live at the end of next year. As the vast majority of energy laws in the UK have been a response to EU legislation, it is unclear what the regulatory regime will look like following the separation of the UK legal system from the EU. It is also unclear whether Northern Ireland will withdraw from the SEM and what the future holds for the proposed I-SEM. In our view it is unlikely that Northern Ireland will pull out of the all-island electricity market given the degree of system integration over the past 9 years.

The UK will need to choose which EU employment laws to adopt and which to repeal. Where differences emerge between Irish and UK employment law, challenges will arise for businesses with operations in both countries. Businesses will need to have an understanding of both legal regimes, particularly the rules on holiday pay, maternity and parental leave, agency workers and TUPE.

Brexit will have a significant impact on financial and banking services. It is probable that financial service providers in the UK will no longer be able to rely on a “passport” enabling them to provide services across the EU and will instead have to be subject to regulation in an EU member state in respect of services provided within the EU. When the UK legal system separates from the EU, there will be two different sets of regulatory systems and entities operating across the EU and UK may need to comply with both. It is also possible that the UK will incorporate new insolvency rules which will further complicate cross border insolvencies and restructurings.

Transactions in the UK or with a UK element (including Northern Ireland) will become subject to the UK’s own competition / merger rules if and when introduced. The UK will no doubt introduce its own rules for merger approval with UK-specific thresholds and their own rules on competition restrictions. This could also mean that more deals will be notifiable in the UK as EU wide exemptions or thresholds are no longer applicable.

All existing corporate group structures which include UK companies or operations will need to be reviewed to ensure that they continue to be fit for purpose in a post Brexit world. For example, groups will need to assess if their current corporate structure still delivers the same benefits from a number of perspectives, and in particular from a legal and tax perspective. This will be because UK company law, in a number of areas, will no longer automatically follow or mirror EU driven company law regime, for example, on cross border mergers.

While Brexit has been described as Ireland’s biggest foreign policy challenge to date, there are opportunities for Ireland to attract foreign direct investment away from the uncertain future of the UK and to promote Dublin as an alternative stable financial hub to London. Once the UK exit the EU, Ireland will be the only English speaking country in the EU with strong ties to the US so there are conceivable advantages for Ireland as a potential alternative location within the EU for UK-based financial institutions where EU passporting rights are central to their operations and for US businesses seeking an English speaking EU base. 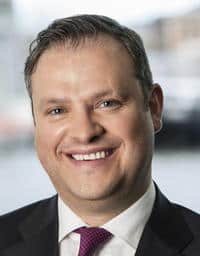 John is the managing partner of Beauchamps and is a partner in our corporate & commercial team.

John leads the firm and is responsible for delivering our firm strategy which is to be market leader in Ireland in our chosen sectors.  John has overseen significant growth in the firm and expansion in the range of legal services provided by the firm.